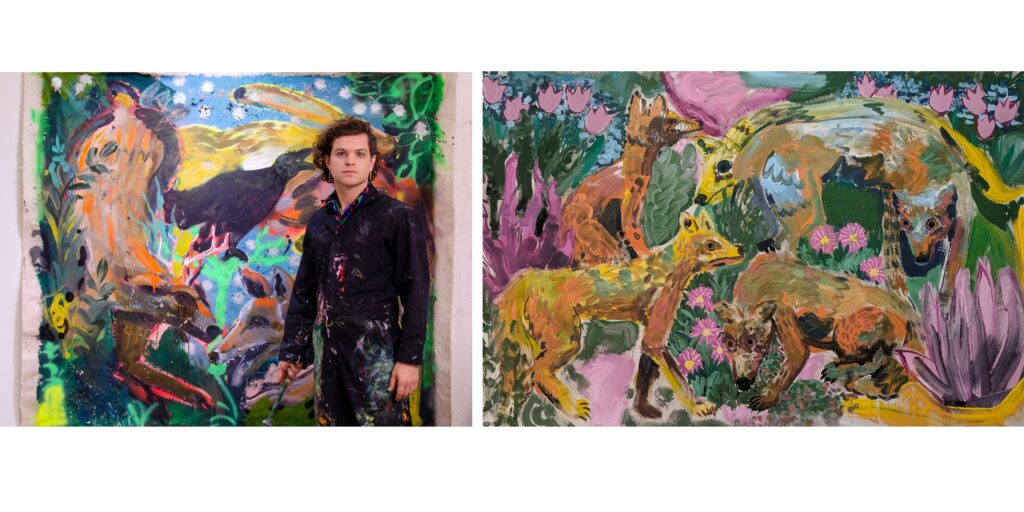 Johansson Projects is open to the public Thur – Sat 1-5pm.

Johansson Projects presents In the Flesh, a solo exhibition of works by Andrew Catanese. Amidst stars twinkling in the night sky, a figure with the torso of a human and the head of a frog stands deep in thought, contemplating the blending of the natural world and the canvas. Holding a paintbrush, the anthropomorphized frog reveals itself to be the artist in the piece titled Portrait of the Artist as a Frog. It is fitting for the artist to consider themselves in this form, as the body of work that makes up Andrew Catanese’s first solo exhibition with Johansson Projects ponders the barriers of the human and animal world, as well as those of the pastoral and sublime, and of day and night. The exhibition, In the Flesh, opens January 6 and runs through February 25, and comprises new paintings, sculptures and an editioned zine.

In new paintings and sculptures, Catanese portrays their admiration and respect for the complex systems of life within the natural world. With densely layered acrylics applied in vivid colors with thick, gestural brushstrokes; Catanese depicts the vast world that exists in counterpoint to the recognizable order and structure of society. Quail, deer, coyotes, and other animals function in harmony with their surroundings so much so that they blend into one another, at times inseparable and indistinguishable from their surroundings.

Hybrid forms and anthropomorphized animals appear across the exhibition. In a zine created for the exhibition titled Just Like The Other Boys, Catanese details their journey as an artist searching for their identity in a societal landscape of restricted gender. By drafting hybrid forms, Catanese found comfort and fluidity that opposed masculine ideals. As they write in Just Like the Other Boys: Understanding the body as a site of perpetual transformation began the process of repairing my relationship to my own queerness and to my body.

The barriers between nature and society are often seen as rigid; an impassable divide between two binaries. The nighttime, when our perception is lowered and senses less attuned only heightens this difference. Yet through In the Flesh, it becomes evident that this divide is self-imposed. In the painting Words That Reach, a number of deer seem to dance in the night, entangled among a forest of trees whose roots sprout humanlike hands. Looking into this otherworldly scene, one where comfort and connection are valued, the swaying bodies and the rooted hands beckon to enter this world from a place not of order, but of respect.